The potential role of the E SRRG pathway in placental dysfunction

Copyright:
© 2021 Society for Reproduction and Fertility 2021

Copyright:
© 2021 Society for Reproduction and Fertility 2021

Proposed mechanism by which placental ESRRG expression and function is altered in pregnancies complicated by FGR and preeclampsia. The hypoxic environment of the maternofetal interface in FGR results in upregulation and activation of HIF1A in the placenta, resulting in inhibition of ESRRG expression. The expression of several miRNAs is upregulated in FGR and we propose that amongst these are key ESRRG regulatory miRNAs. Binding of these miRNAs to the 3’UTR of ESRRG results in mRNA degradation and inhibition of ESRRG protein translation. This leads to reduced expression of genes downstream of ESRRG, including CYP19A1, HSD17B1, HSD11B2 and PLAC1. These downstream genes play an important role in placental hormone production and regulating different aspects of cytotrophoblast function, including villous cytotrophoblast proliferation and extravillous trophoblast invasion. 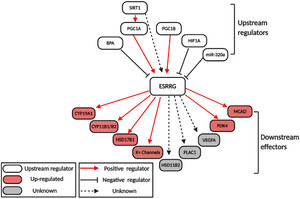 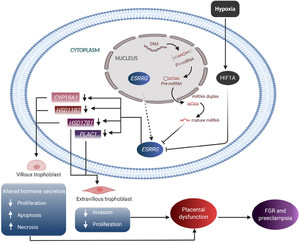