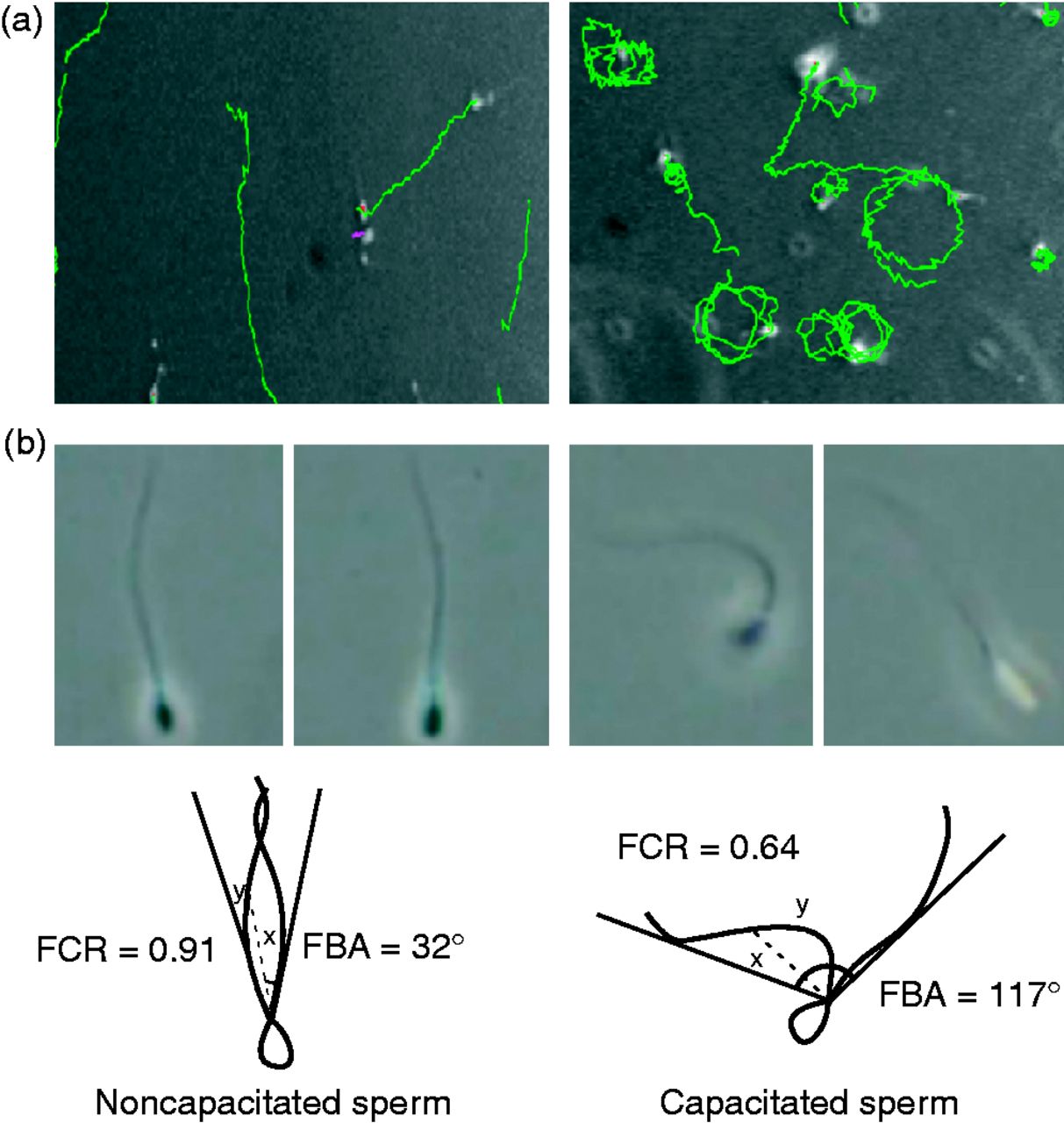 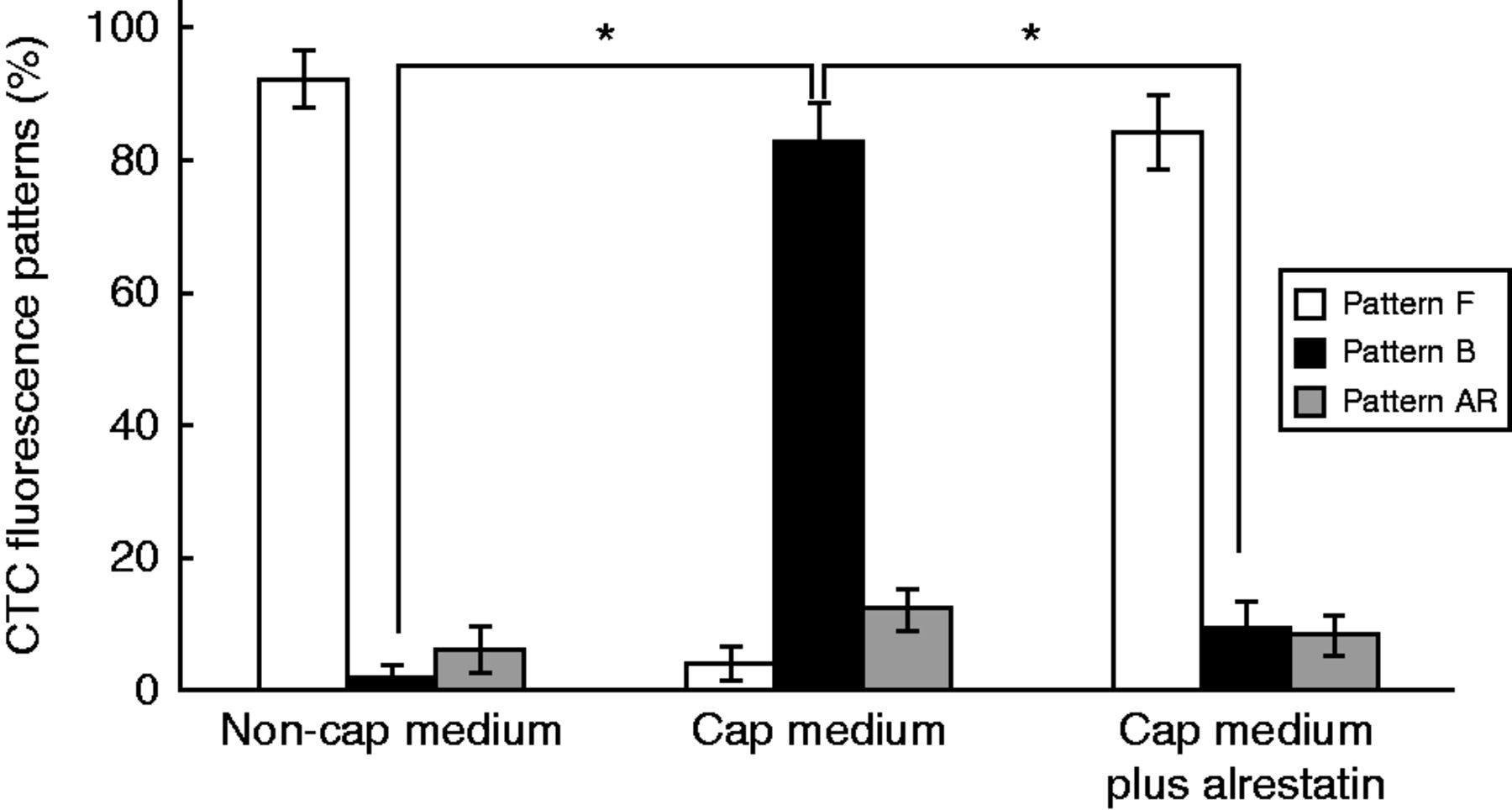 Effect of alrestatin on the change in CTC-fluorescence staining pattern. The patterns of CTC-fluorescence staining was determined on sperm cultured either in Non-cap medium or in Cap medium in the absence or the presence of 500 μM alrestatin. The percentage of sperm stained in either F, B, or AR pattern was assessed. Noncapacitated sperm: pattern F, capacitated sperm: pattern B, and acrosome reacted sperm: pattern AR, were indicated by open, closed, and gray bars respectively. Data are expressed as mean±s.e.m. from six determinations. *P<0.001. 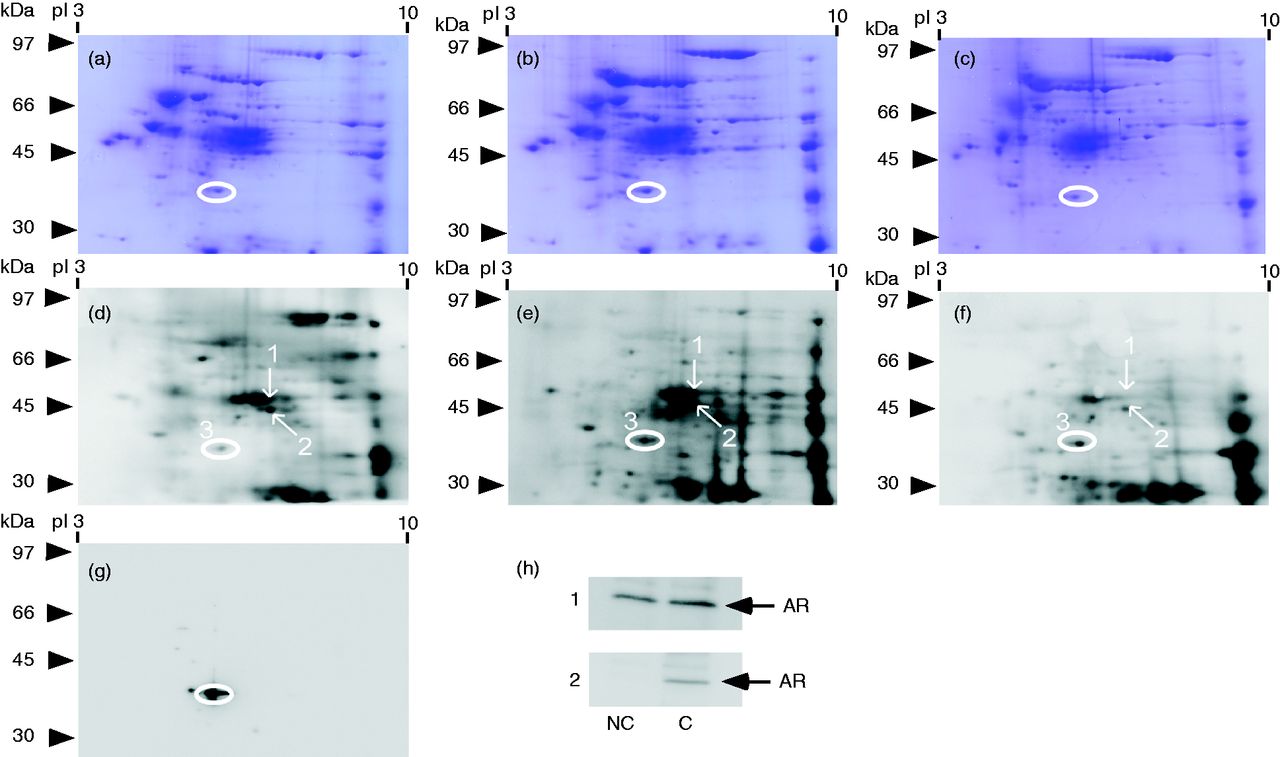 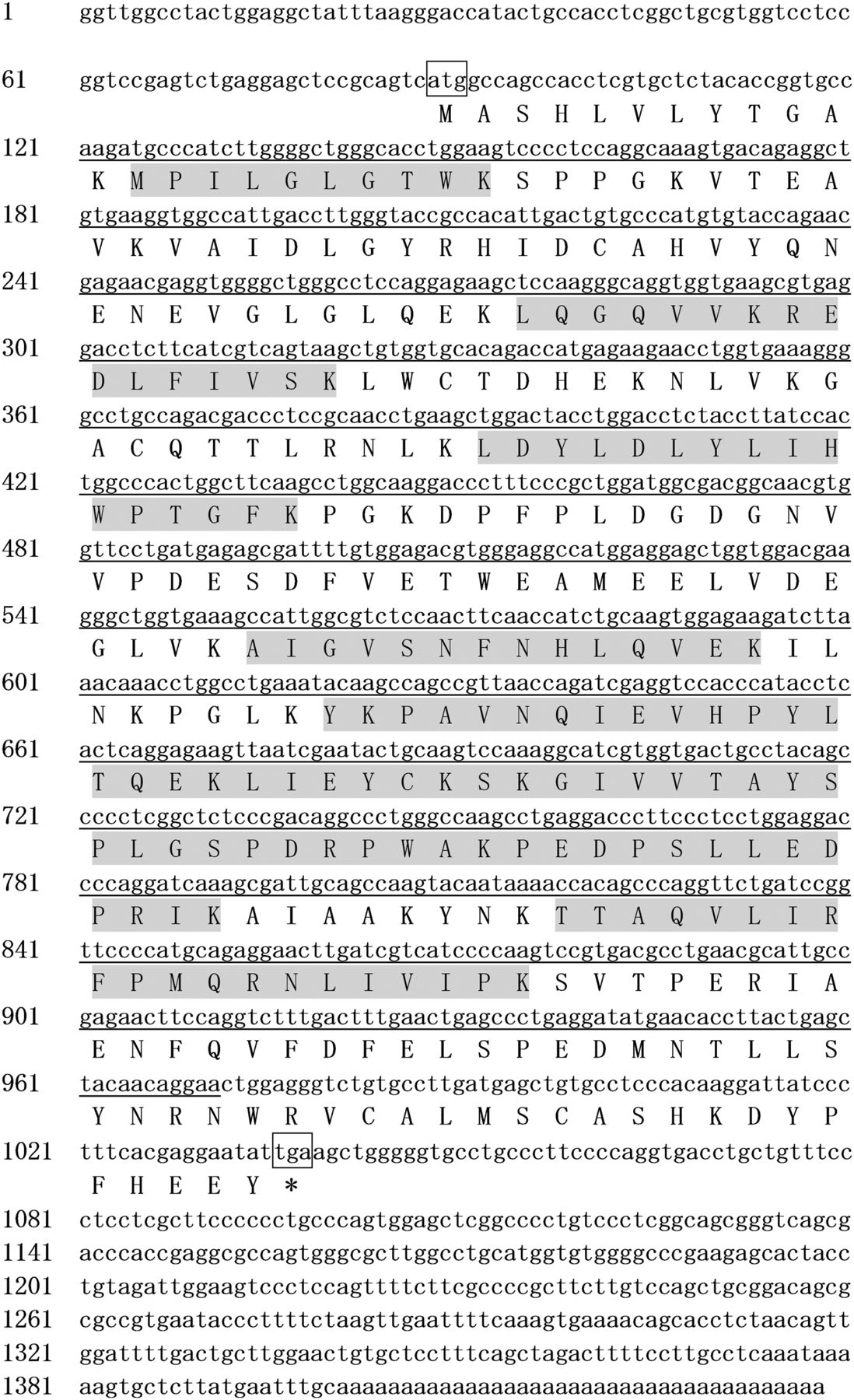 Nucleotide and deduced amino acid sequences of aldose reductase (accession no. AK398724). The regions used for the preparation of the recombinant protein are indicated by underline. Six peptides identified by the mass spectrometry are indicated by shaded boxes. The stop codon “tga” is indicated by open box with asterisk (*). 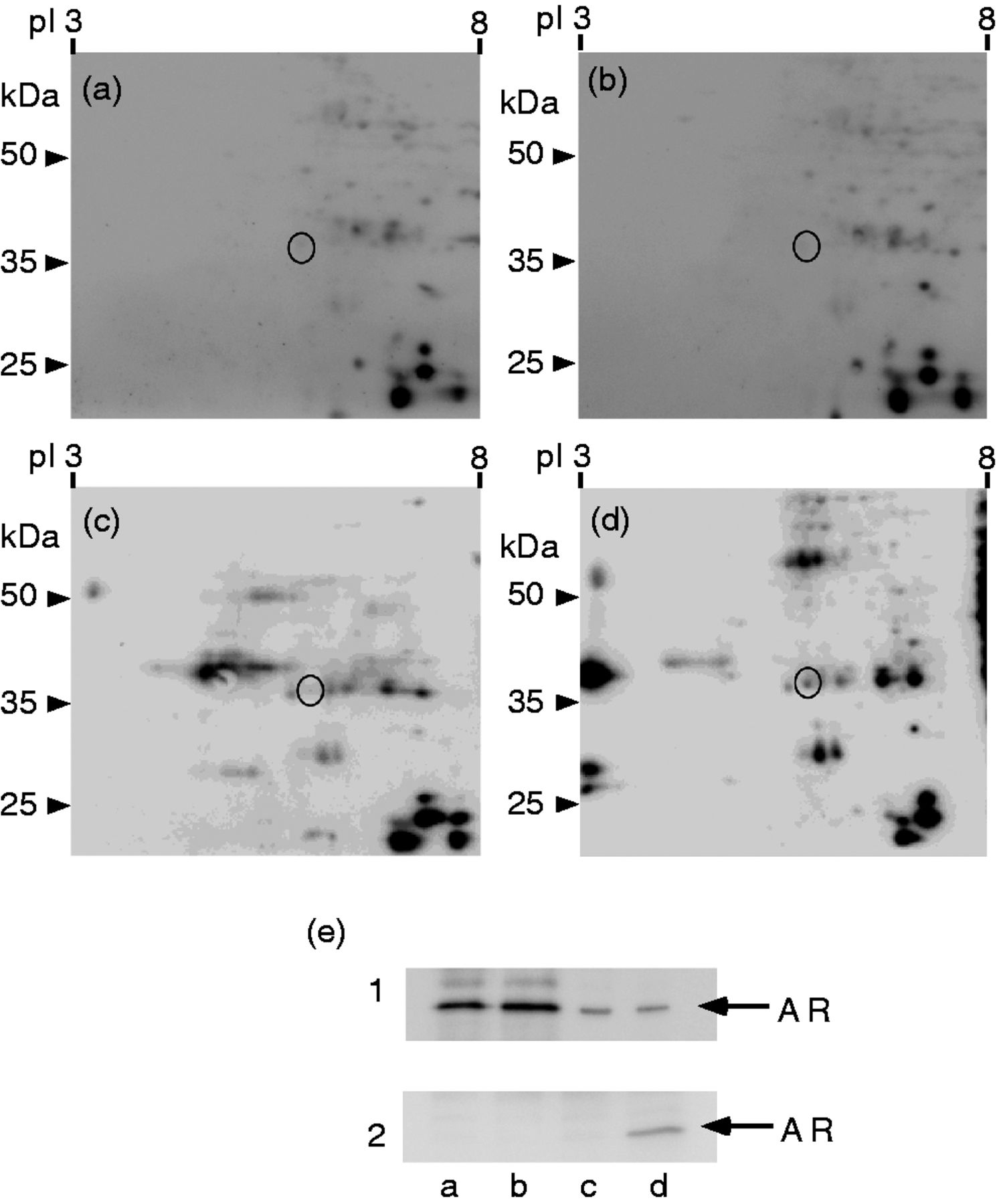 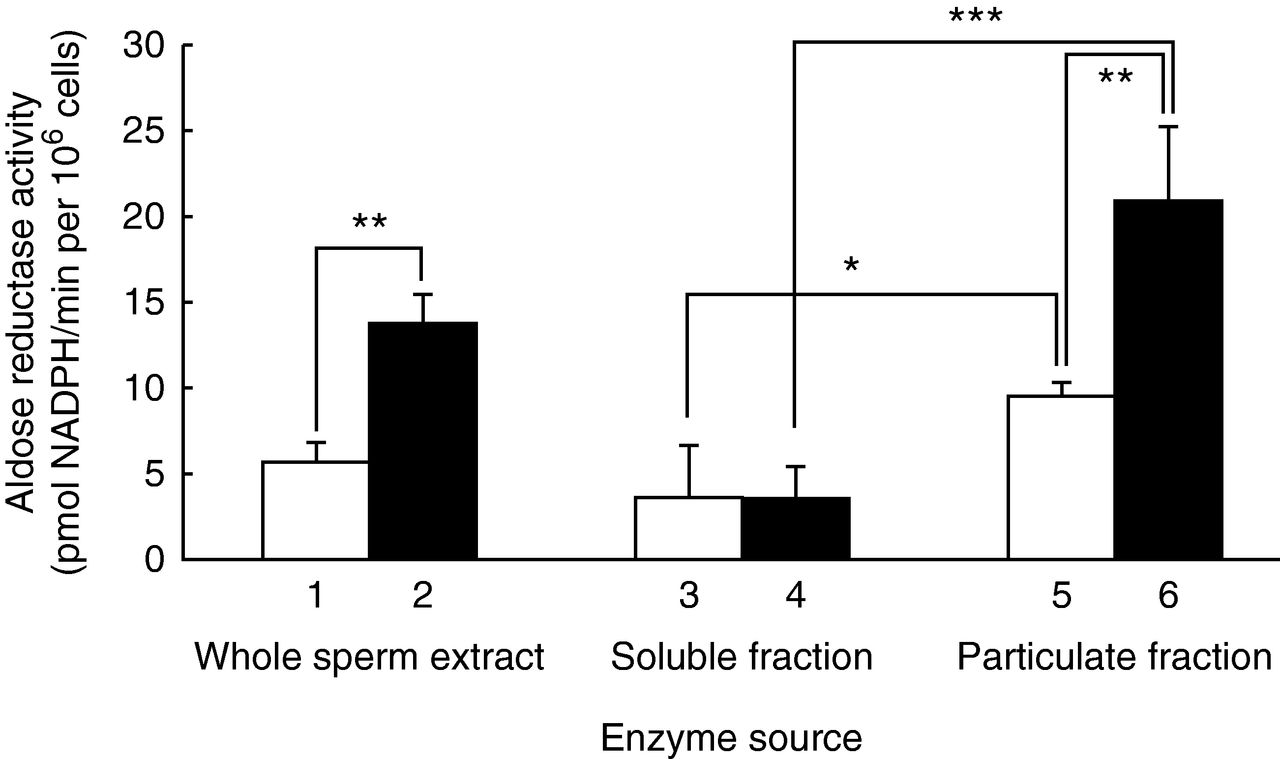 Changes in the sperm aldose reductase activities through capacitation. The aldose reductase activities of whole sperm extract, soluble fraction, and particulate fraction prepared from the noncapacitated (open bar) or capacitated (closed bar) sperm were determined as described in ‘Materials and methods’ section. Data are expressed as mean±s.e.m. from six determinations. *P<0.05, **P<0.01, and ***P<0.001.

Effect of alrestatin on the concentrations of GSH. The GSH levels were determined on sperm incubated either in Non-cap medium or in Cap medium in the absence or the presence of 500 μM alrestatin. The concentrations of GSH were determined as described in ‘Materials and methods’ section. Data are expressed as mean±s.e.m. from six determinations. *P<0.05. 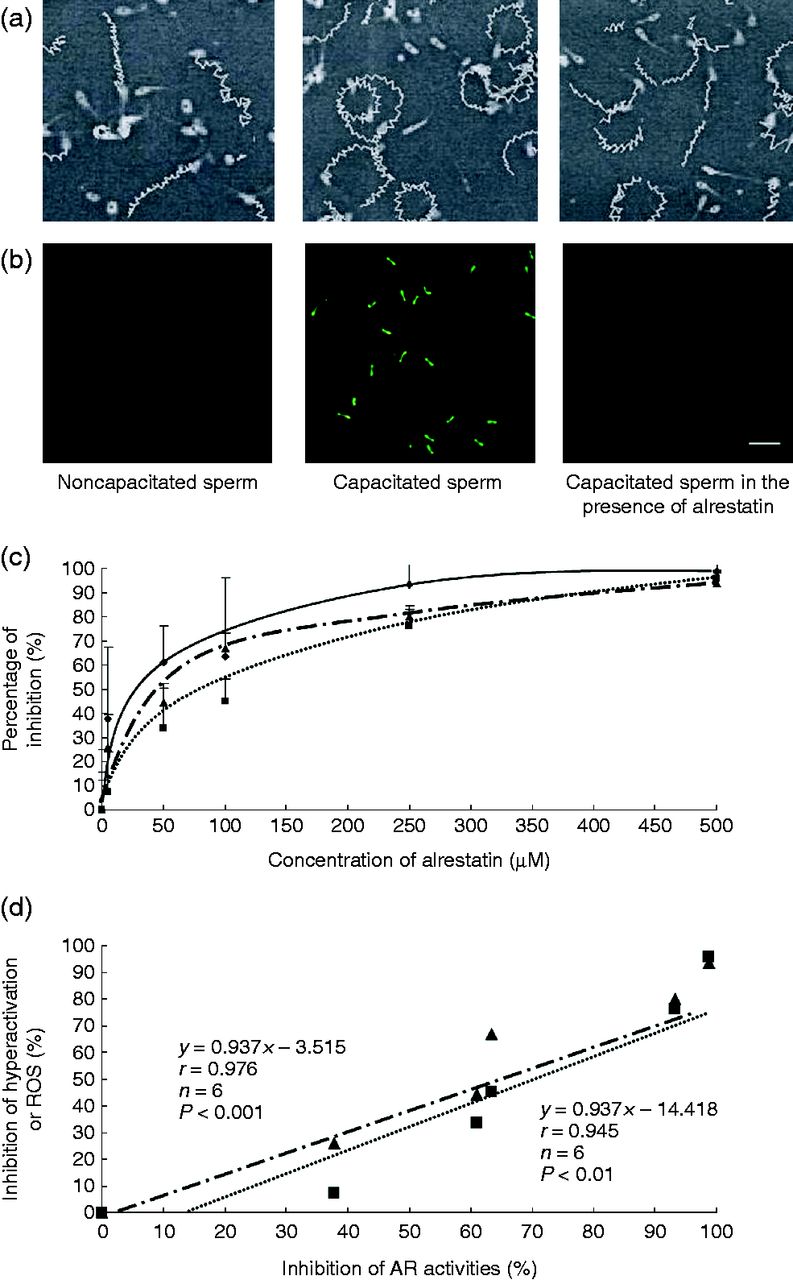 Effects of alrestatin on the changes in the motility, ROS levels, and aldose reductase activities of porcine sperm during capacitation. Cauda epididymal sperm were incubated in Non-cap or Cap medium in the presence or the absence of 500 μM alrestatin at 37 °C for 3 h under 5% CO2. (a) Changes in the movement of the cauda epididymal sperm were observed under the microscope. Swimming trajectories were obtained with CASA (frame rate 60 Hz, frame acquired 55). (b) ROS contents in sperm were analyzed using H2DCFDA as a probe and observed under the microscope. Bar=100 μm. (c) Effects of the concentration of alrestatin on aldose reductase activities (rhombus, solid line), hyperactivation of motility (triangle, chain line), and production of ROS (square, dotted line). Aldose reductase activity of whole sperm extract, percentage of hyperactivated sperm in motile sperm, and ROS levels were determined in the sperm capacitated in the presence of various concentrations of alrestatin. Data are expressed as percentage of alrestatin induced inhibition and shown by mean±s.e.m. from four determinations. (d) The correlations between the inhibition of aldose reductase activity and the inhibition of hyperactivation (triangle, chain line) or ROS production (square, dotted line) by alrestatin. The data obtained in (c) were replotted. 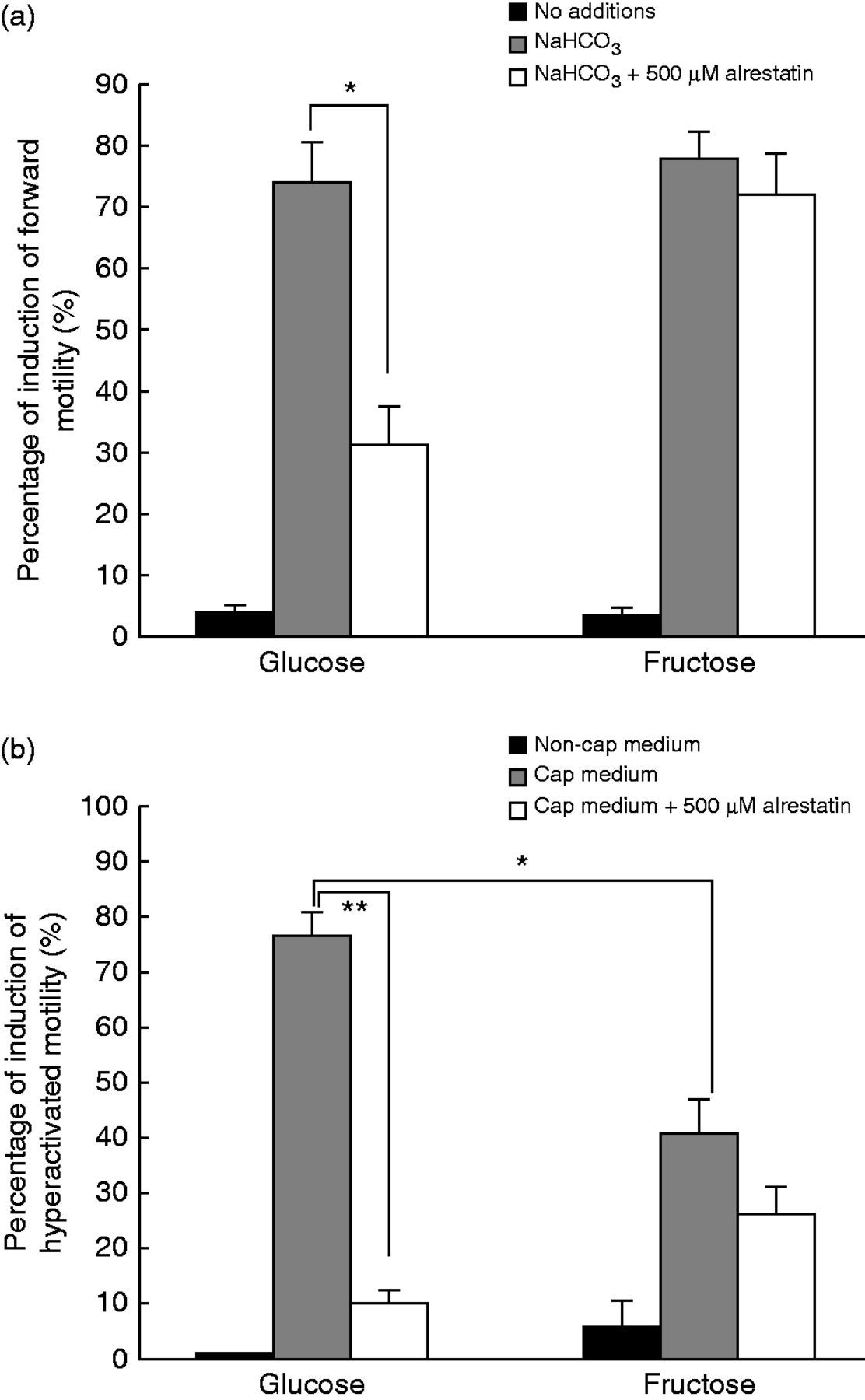 Effects of glucose and fructose on the sperm motility. (a) Effects of alrestatin on the initiation of the forward motility by bicarbonate in the presence of either glucose or fructose. The forward motility of cauda epididymal sperm was induced by the addition of 20 mM NaHCO3 in Non-cap medium at 37 °C. (b) Effects of alrestatin on the induction of hyperactivation in the presence of either glucose or fructose. Cauda epididymal sperm were incubated in Non-cap or Cap medium containing either glucose or fructose in the presence or absence of 500 μM alrestatin. The percentage of sperm showing forward motility (a) or hyperactivated motility (b) to motile sperm was calculated under the microscope. Data are expressed as mean±s.e.m. from triplicate determinations. *P<0.01 and **P<0.001. 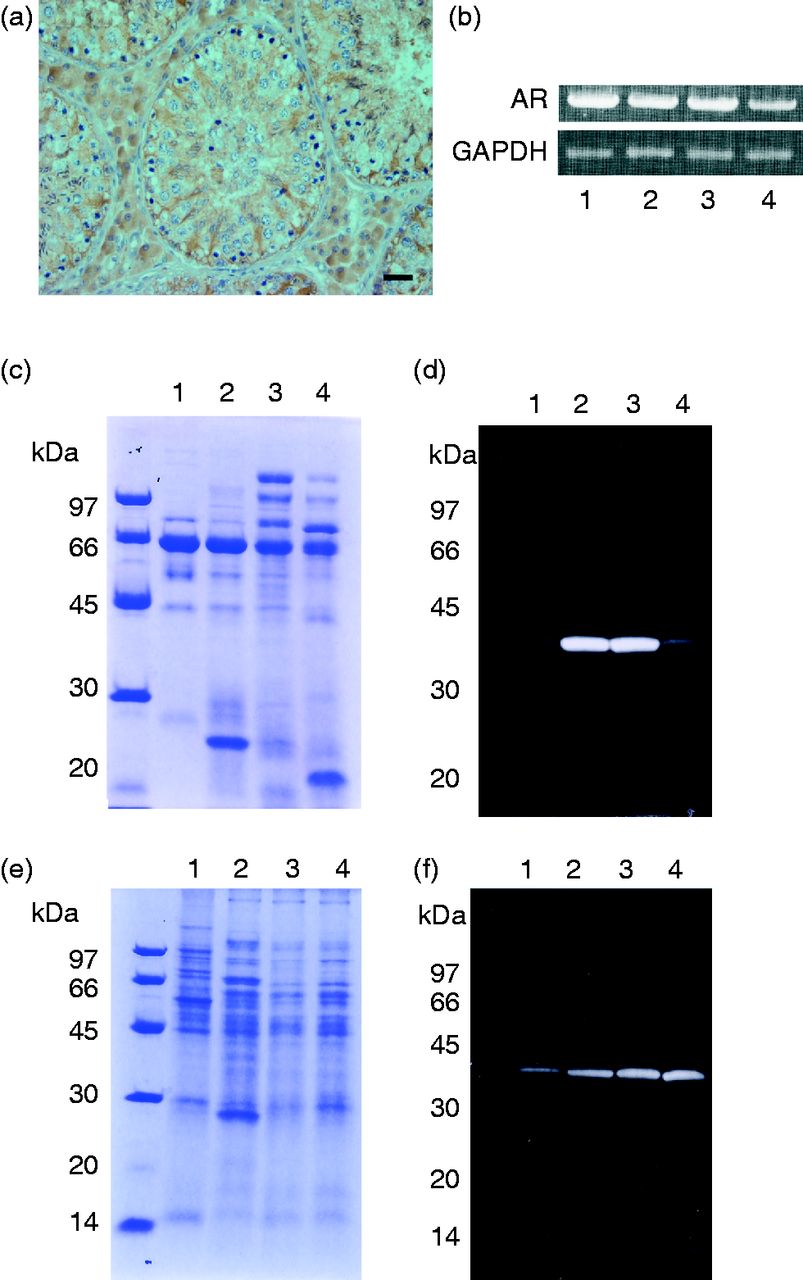