Copyright:
© 2016 Society for Reproduction and Fertility 2016

Copyright:
© 2016 Society for Reproduction and Fertility 2016 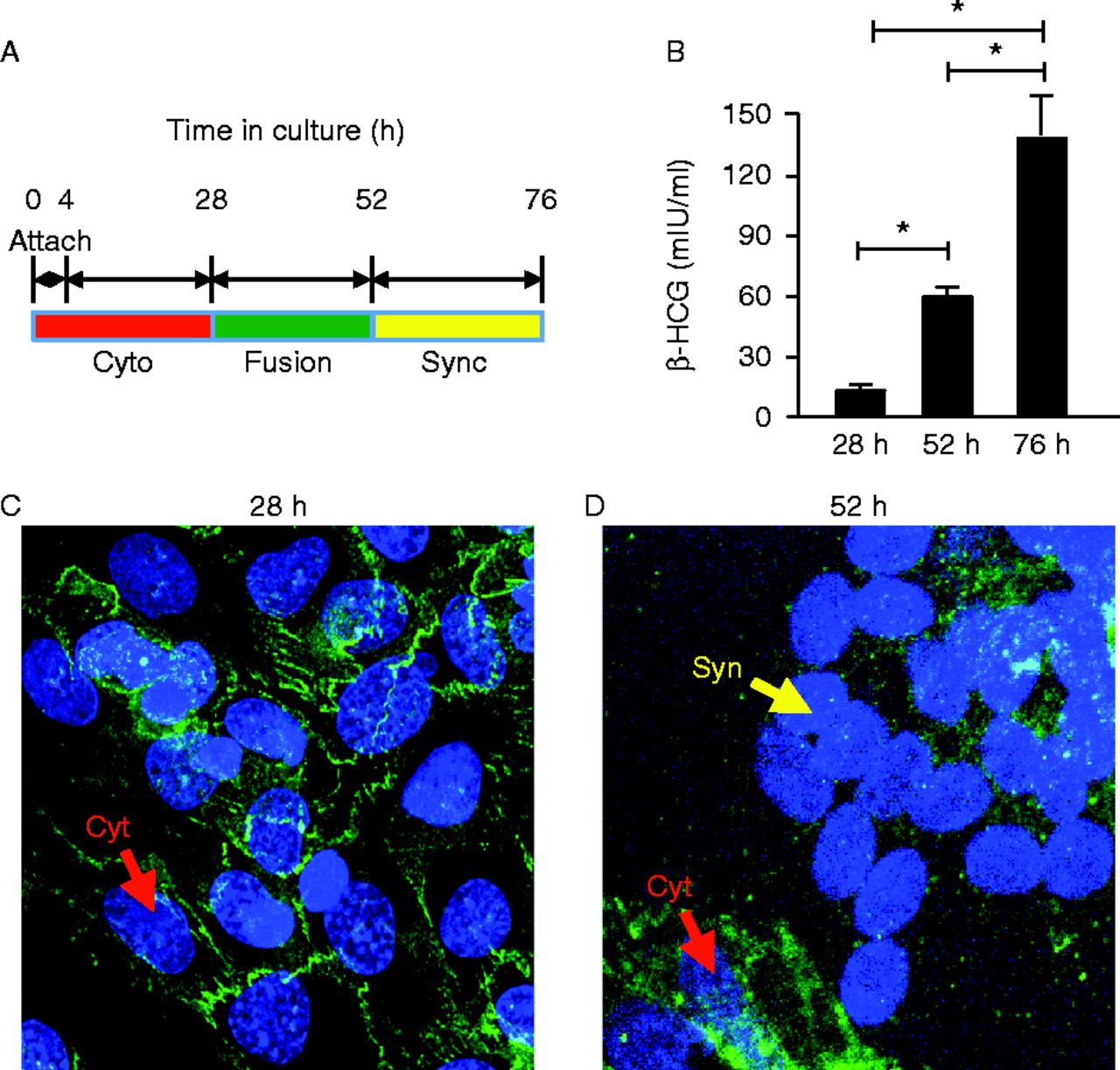 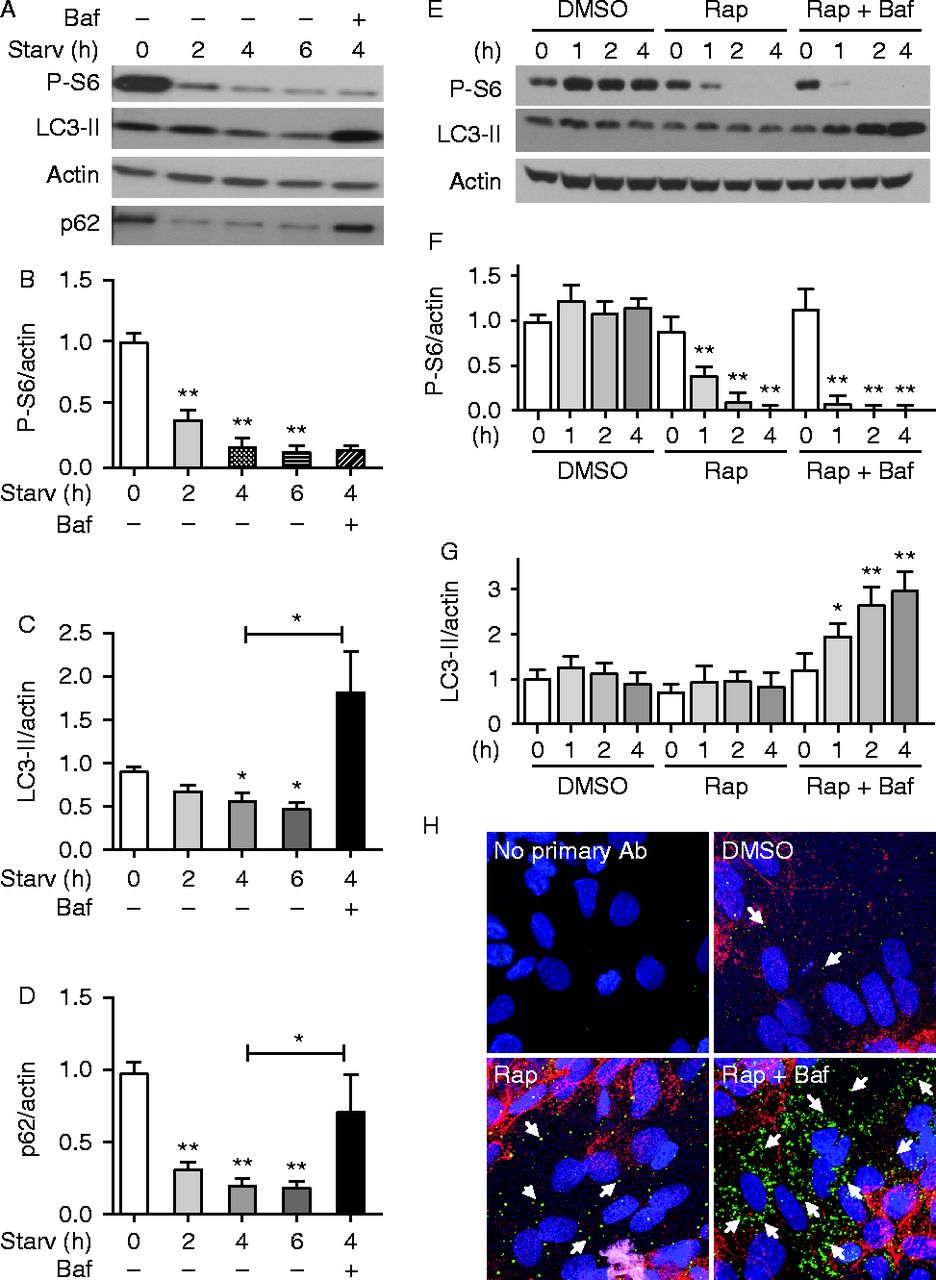 Starvation and rapamycin induce autophagy in primary human syncytiotrophoblasts. Cells were subjected to starvation (A, B, C and D) or cultured in nutrient replete conditions (E, F, G and H) and exposed to DMSO, rapamycin (Rap), or Rap and bafilomycin (Baf), for the times indicated. All cells were cultured for a total of 76 h and exposed to the condition tested for the times indicated. (A) Western blot of P-S6, p62, LC3-II, and actin from trophoblasts exposed to starvation conditions. Cells in the last lane were treated for 4 h with bafilomycin before collection. (B, C and D) Densitometric analyses of western blots of the indicated proteins, normalized to actin. (E) Western blot of P-S6, LC3-II, and actin exposed to vehicle control, Rap or Rap and Baf. (F and G) Densitometric analyses of western blots of the indicated proteins, normalized to actin. For all densitometric analyses, *P<0.05; **P<0.01; ANOVA with Bonferroni correction. n=4 cultures from different placentas. (H) Immunofluorescence for p62 and E-cadherin in trophoblasts exposed for the final 4 h of culture to DMSO, Rap, or Rap and Baf. Red: E-cadherin; green: p62; blue: DNA; arrows: p62 puncta. 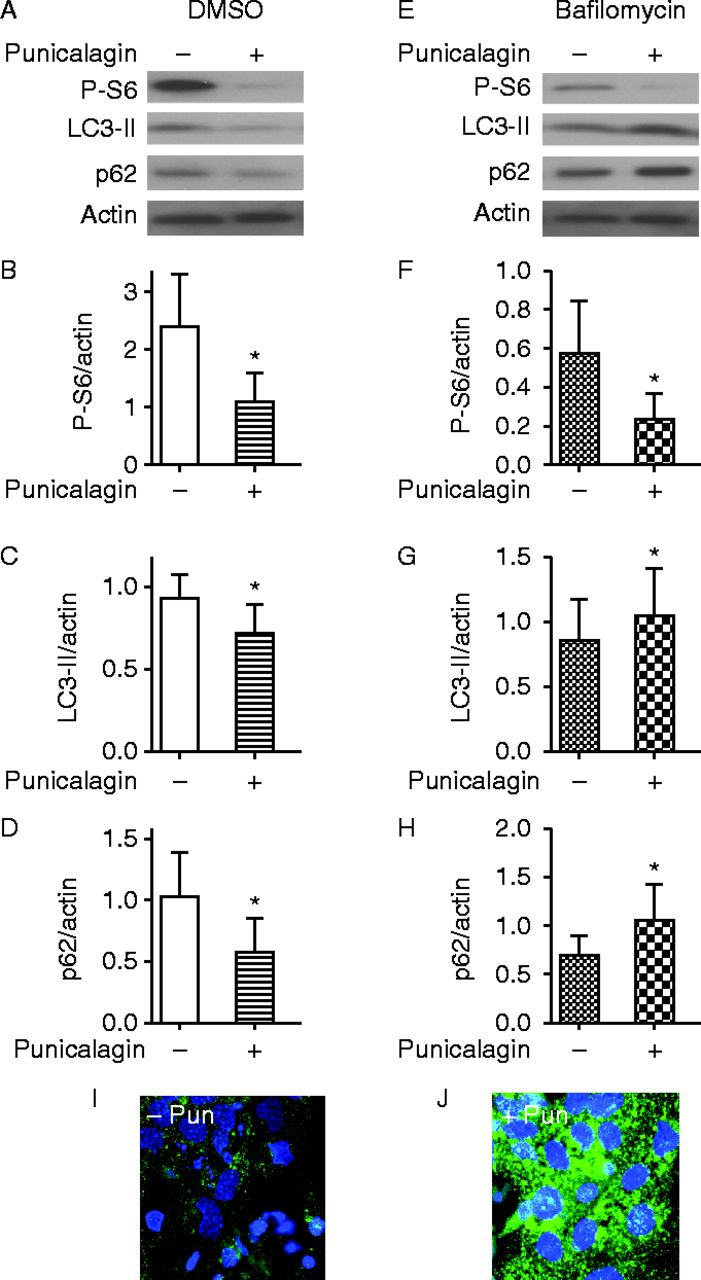 Punicalagin induces autophagy in syncytiotrophoblasts. Representative western blots (A and E) and densitometry (B, C and D; F, G and H) of P-S6, LC3-II, p62, and actin from primary human trophoblasts cultured for 76 h, in the presence or absence of punicalagin, DMSO or bafilomycin during the 24 h prior to harvest. *P<0.05; one-tail t test. n=4 primary cultures from different placentas. (I and J) Representative immunofluorescence image of LC3-II in syncytiotrophoblasts treated with chloroquine in the presence or absence of punicalagin (Pun). 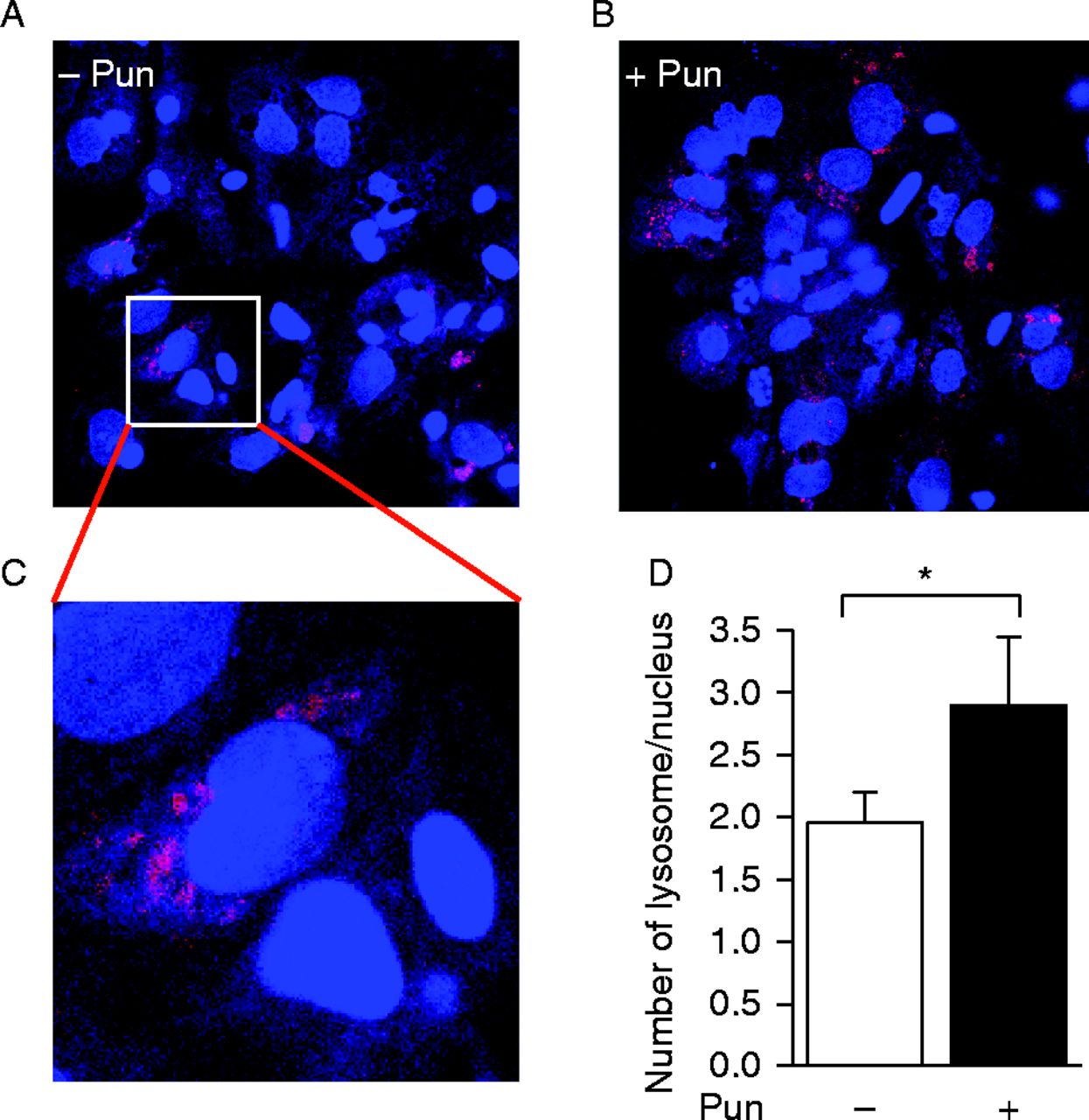 Punicalagin increases lysosomes in syncytiotrophoblasts. Representative images of syncytiotrophoblasts treated with vehicle control (A) or punicalagin (B) for the last 24 h with a 30-min (prior to harvest) exposure to 50 nM LysoTracker Red. Nuclei are stained blue with Draq 5. (C) Enlarged image of selected area in A. (D) Quantification of lysosomes. *P<0.05; t test. n=4 primary cultures from different placentas. 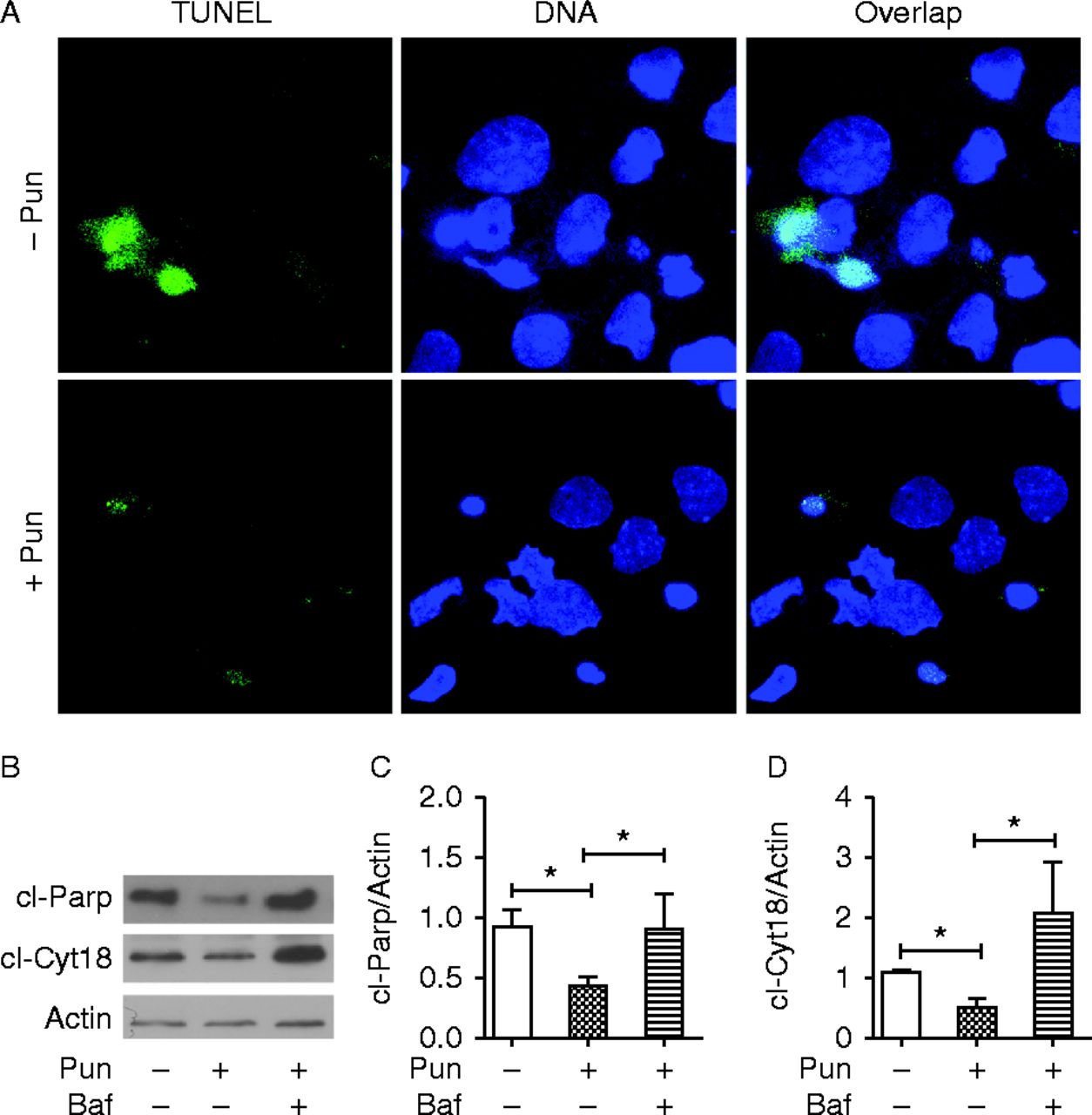 Knockdown of ATG16L1 reduces the effect of punicalagin to decrease apoptosis in syncytiotrophoblasts. (A) Representative western blots of Atg16L1, actin, and cl-Parp in primary syncytiotrophoblasts transfected with ATG16L1-specific siRNA or scrambled control siRNA in the presence or absence of punicalagin. (B and C) Densitometric analyses of Atg16L1 (B) and cl-Parp (C), normalized to actin. *P<0.05; ANOVA with Bonferroni correction; n=4 primary cultures from different placentas.