Methylation dynamics during folliculogenesis and early embryo development in sheep

Copyright:
© 2017 Society for Reproduction and Fertility 2017

The journal and the authors regret an error in this article published in the May (vol 153, issue 5 pp 605–619) issue of the journal. Figures 1 and 2 were erroneously repeated although the legends were correct. Figure 2 and its legend is correct as published and the correct Figure 1 is published below with the correct legend. The journal apologises for this error.

Copyright:
© 2017 Society for Reproduction and Fertility 2017 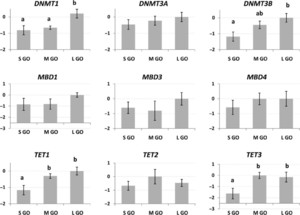