A field guide to Aurora kinase inhibitors: an oocyte perspective

The Aurora kinases (AURKs) are serine/threonine protein kinases that are important for cellular division, both in mitosis and meiosis (Nguyen & Schindler 2017). In mammals, this family consists of three members: Aurora kinase A (AURKA) and Aurora kinase B (AURKB), which are expressed in all cells of the body, and Aurora kinase C (AURKC), which is expressed in germ cells and in some cancer cells (Quartuccio & Schindler 2015). Because of their critical roles in spindle formation and chromosome segregation during cell division, they are widely studied as potential cancer therapeutic targets. Therefore, several small molecule inhibitors exist that inhibit these kinases (de Groot et al. 2015).

One challenge in targeting specific AURKs with inhibitors is that they share significant sequence and structure similarities (Quartuccio & Schindler 2015). But, despite sharing homologous domains, each AURK in mouse oocytes appears to have distinct functions, while also having compensatory mechanisms that are observed in knock-out mouse models (Schindler et al. 2012, Balboula & Schindler 2014, Nguyen et al. 2018, Blengini et al. 2021). For example, a dominant-negative allele of Aurkc shows that AURKC is uniquely required for kinetochore-microtubule surveillance (Balboula & Schindler 2014), but in oocytes that lack AURKC, AURKA takes over this function and supports meiosis I (Nguyen et al. 2018). To bypass genetic-based compensations, inhibitors are useful to determine Aurora kinase functions. But, although there are several available commercial inhibitors, there is a lack of consensus on which inhibitor concentration is required to inhibit a specific AURK without affecting the activities of other two. The most widely used inhibitors for targeting the AURKs in oocytes are MLN 8237 (MLN) for AURKA, and ZM 447439 (ZM) and AZD 1152 (AZD) for AURKB/C (de Groot et al. 2015, Nguyen et al. 2018, Nikalayevich et al. 2022). The specificity of these inhibitors for each AURK protein depends on their intracellular concentration and the cell type. At high concentrations, they have off-target effects, inhibiting the other family members to varying degrees (de Groot et al. 2015).

To evaluate the specificity of each of these inhibitors in mouse oocytes, we isolated oocytes from WT CF-1 females and matured them in vitro to metaphase I in a range of concentrations for each inhibitor that is used in the oocyte literature. We do not use the standard mineral oil overlay because the drugs are lipid soluble and may partition into the oil. Instead, we use center-well organ culture dishes that allow for a larger volume of culture media and have an outer ring for water that prevents evaporation. After resolution of metaphase I oocyte protein lysates by SDS-PAGE, we performed immunoblotting to detect the activated forms of AURKA and AURKC using a phospho-specific antibody that recognizes the phosphorylated forms of AURKA (pThr288), AURKB (pThr223), and AURKC (pThr198) (pA/B/C). Finally, we quantified the levels of pAURKA and pAURKC; pAURKB was not detectable in our lysates because it is the least abundant of the three isoforms and requires many more oocytes for detection (Nguyen et al. 2018). In oocytes matured in culture media containing MLN, pAURKA was absent with 0.5 µM treatment, the lowest concentration tested. Importantly, pAURKC was significantly reduced by 60% with 5 µM and absent with 10 µM treatments (Fig. 1A, B, and C). These data indicate that MLN can specifically inhibit AURKA in mouse oocytes but only when using a range between 0.5 and 2 µM, and not higher. When we evaluated AURKC inhibitors, we observed similar concentration-dependent off-targeting effects. pAURKC was absent at 0.1 µM of AZD treatment, the lowest concentration used (Fig. 1D and F). However, when we treated oocytes with higher doses of AZD, the data indicate significant inhibition of AURKA at 0.5 µM (40% reduction) and further inhibition as concentrations increased, reaching 80% of inhibition at 10 µM (Fig. 1D and E). These data indicate that AZD is a specific inhibitor of AURKC in mouse oocytes but only when applying concentrations lower than 0.5 µM. Finally, when we evaluated ZM for specificity, the results were concerning. This concern arises because of the prevalence of its use in oocyte-focused experiments. At the lowest concentration where pAURKC is absent (2 µM) (Fig. 1G, H, and I), 50% of AURKA was inhibited. These data indicate that ZM is not a specific inhibitor of AURKC in mouse oocytes because even at the lowest concentration that inhibits AURKC completely, AURKA is partially inhibited.

We demonstrate that MLN and AZD can specifically inhibit AURKA and AURKC, respectively, whereas ZM is a pan-AURK inhibitor even at low concentrations in mouse oocytes. MLN and AZD also affected the activity levels of both AURKs in a dose-dependent manner. Because of the number of mice it would require to evaluate pAURKB levels in oocytes, we are unable to conclude the effect of MLN and AZD treatment on AURKB activity. However, because of the compensatory nature of AURKA and AURKC in oocytes, we view off-target effects of these two AURKs as the most critical to evaluate. Notably, several of the concentrations that we found to be nonspecific were used in other studies where potential off-target effects were not extensively evaluated. It is therefore imperative that the interpretations of results from such studies be taken with caution. Although our results show the potential of MLN and AZD to be specific and discourage the use of ZM, the effective concentrations should be determined for each experimental setting when inhibiting these kinases. Although we have not yet tested other experimental settings, differences in the range of specific concentrations could arise based on experimental methods (i.e. culture media and conditions, chronic inhibition vs acute inhibition) or the genetic background of the mice. For this reason, we propose and strongly encourage evaluating the activity levels of AURKs using this Western blotting assay when conducting experiments with these and other AURK inhibitors.

Karen Schindler is an Associate Editor of Reproduction. Karen Schindler was not involved in the review or editorial process for this study, on which she is listed as an author. The other authors have no declaration of interest.

Evaluation of Aurora kinase inhibitor specificity in mouse oocytes. (A, D, and G) are representative Western blot images of lysates from metaphase I mouse oocytes matured in vitro in the presence of indicated concentrations of MLN 8237 (Selleckchem, #S1133) (A); AZD 1152 (Selleckchem, #S1147) (D); and ZM 447439 (Tocris Bioscience, #2458) (G). One hundred oocytes were loaded per lane. Proteins were separated by electrophoresis in 10% SDS polyacrylamide gels. After blotting, the membranes were incubated overnight at 4°C with primary antibody to detect pAURKA/B/C (1/500; Cell Signaling Technology, #2914) or for 1 h to detect α-tubulin (1:1000; Cell Signaling Technology #11H10). Next, the membranes were incubated with anti-rabbit horseradish peroxidase (HRP) secondary antibody (1:1000; Kindle Biosciences #R1006) for 1 h at room temperature. The signals were detected using ECL Western blotting detection reagents (Kindle Biosciences, Greenwich, CT, USA; KwikQuant Western Blot Detection Kit, R1002) following the manufacturer’s protocol. Images were analyzed using Image J software (NIH) (Schneider et al. 2012) and were normalized to α-tubulin and set to one in DMSO treatment. (B, E, and H) Quantification of pAURKA from (A), (D), and (G) respectively. (C, F, and I) Quantification of pAURKC from (A), (D), and (G) respectively. Statistical analyses were performed using one-way ANOVA, ****P < 0.0001, ***P < 0.001, **P < 0.01, *P < 0.05. Graphs show the mean ± s.e.m. from three independent experiments for MLN and ZM and two independent experiments for AZD. 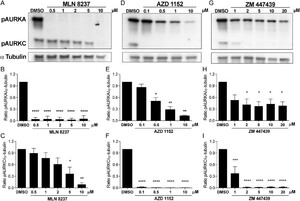